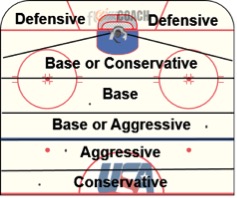 The depth portion goaltender positioning is derived from the Buckley Positioning System (BPS) and focuses on the goaltender finding optimal depth.  Mike Buckley, is a former collegiate and professional goalie and current Development Goalie Coach for the Stanley Cup Champion Pittsburgh Penguins.

Coaches have kept sports alive in 2020. Has your kid's coach helped them through this crisis?Nominate them   for a chance to win $2500!