The Man Behind The Mission

PLYMOUTH, Mich. – Lou Vairo has a handful of jokes that his closest friends have heard at least a hundred times. One of his time-tested favorites is the one about the difference between two breakfast staples. A chicken, he says, is dedicated to laying eggs, while a pig is committed to becoming bacon.

When he thinks about his old friend Warren Strelow, both of these terms are interchangeable.

“He was as dedicated and as committed as anyone there has ever been when it comes to making goalies better,” said Vairo, whose relationship with the goaltending pioneer spanned more than 30 years, including two stints on U.S. Olympic Team coaching staffs.

“He was willing to devote everything to make his goalies better. And along the way he revolutionized how we coach the position.”

While it’s only fitting that the pre-eminent goaltending camp is named in his honor, few of the talented young goalies who hit the ice for the first day of the 11th annual Warren Strelow National Goaltending Camp had ever heard of the camp’s namesake before, or know much about the impact he’s had on the position.

“I don’t know anyone else who lived and analyzed the position like he did,” Vairo said. “He was a wonderful hockey man who was totally committed to the game and helping kids.”

But it wasn’t just youngsters that Strelow had a hand in developing. When his good friend Herb Brooks was tabbed to lead a group of college kids at the 1980 Olympic Winter Games in Lake Placid, N.Y., Strelow was brought in to work with the team’s goaltenders.

He proved to be the perfect mentor for the team’s two goalies who each sported different styles when it came to stopping the puck. Jim Craig was an athletic goalie with a flair for making the big acrobatic save. Steve Janesak, who played for Brooks at the University of Minnesota, was more of a traditional textbook goaltender who was seldom out of position.

In true Strelow style, he found a way to bring out the best in both goalies without trying to make them into something they weren’t.

“Warren was an amazing teacher who brought out the best in each goalie’s talents. There was no one-size fits all when it came to the way he coached goalies,” Craig said.

“He would look at the person’s make up, he’d look at his athleticism, his hockey IQ and then, like a great chef, he would add some ingredients to make you better.”

As he looks back at the life and contributions of his friend and mentor, Craig said Strelow did more than just help lead the U.S. to the biggest upset in sports history. He also revolutionized the position and the game more than he has ever been given credit for.

Prior to teaming up with Brooks at the University of Minnesota, where they would win three NCAA titles, and in Lake Placid, the thought of a coach dedicated solely to working with goalies was unheard of. But Strelow’s passion for the position and his never-ending desire to improve his craft has been influential on future generations of goalies as well as goalie coaches.

“Herb really created the full-time position for goalie coaches. Nobody had ever done that before,” Craig said. “He saw in Warren the ability to do that and Warren took the opportunity and not only made the most of it, he became one of the best goalie coaches in the National Hockey League.

“Everybody who has a job right now as a goalie coach should thank their lucky stars for Herb Brooks and Warren Strelow. Because without them, it was ‘get in the net, stop the puck, don’t bother them.’”

After his Olympic success, Strelow became the first full-time goalie coach in the NHL with the Washington Capitals from 1983 to 1989 and had a similar role with the New Jersey Devils from 1990 to 1993 when he worked with Martin Brodeur. He spent the final 10 years of his life developing a number of talented netminders in the San Jose Sharks system.

In 2002, he reunited with Brooks one last time at the Salt Lake Olympics. Despite his declining health, Strelow played a key role in helping the U.S. win a silver medal on home ice.

“Physically he wasn’t in good shape. But even though he was in a lot of pain he never missed a practice,” Vairo recalled. “He would be out there on the ice in tennis shoes, which was not the safest thing. But even in tennis shoes he was making guys better.”

In 2004, Strelow was inducted into the U.S. Hockey Hall of Fame, and shortly after his passing in 2007 the first Warren Strelow National Goaltending Camp was held. Seeing the next generation of American goalies working side by side with a cadre of dedicated goalie coaches would make Strelow smile, and he would likely be ready to roll up his sleeves and give a helpful pointer or two.

“He was always evolving,” Craig said. “If he was coaching goalies today, there wouldn’t be any old school, new school, it would be the right school. He was just that into it and he had such a feel for it. He was unbelievable. I don’t think there will be many more like him.” 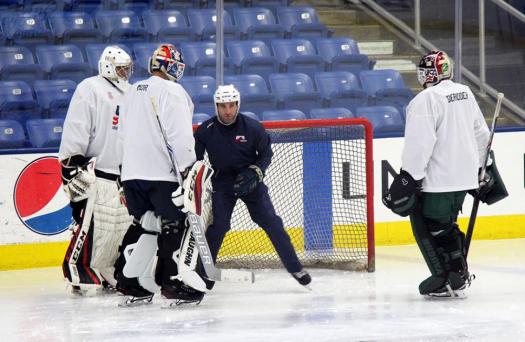