Few positions on the ice can compare to the goalie. Goaltenders are saddled with a task unlike any other and can be hailed as heroes and scapegoats depending on the outcome of each game. Coaching them can come with its own differences as well. But just because you never stepped between the pipes doesn’t mean you can’t develop strong goaltending.

Kid-Sized Instruction: Kids look at goalies in the NHL and try to learn from them. They want to look like the next Ryan Miller or Jonathan Quick. What they sometimes don’t realize is what a grown adult goalie can do is very different from what a youth goalie can and should be doing.

“My philosophy for these young goalies is that I want them to learn how to react and not just drop and hope they stop the puck,” said Schwab, a former NHL goaltender who also helps coach in Seattle’s Sno-King Hockey Association, one of USA Hockey’s Model Clubs. “These kids see NHL goalies who are 6-foot-2 and 6-foot-4 that are able to be in proper position, and because of their size, drop down for an easy save.

“These kids, because they are so much smaller, there is so much net available and they are not successful.”

Remind your players that even those NHL goalies learned the proper way to make a save before playing the way they do. Simply dropping down isn’t going to always make the save.

Don’t Just Fire Pucks at Them: There’s no question goalies need to see a fair amount of rubber during practices. But that shouldn’t be the only focus, especially when they are just starting out.

“Coaches need to understand you have a 9- or 10-year-old in goalie equipment,” said Schwab. “Even though they are suited up with the padding, they’re still not made for an adult firing wrist shots or a bunch of kids shooting on them at once.”

Peppering a young goalie with shots  – especially hard shots from adult coaches – can lead to them being scared of the puck and ultimately losing the joy of the position.

“Take shots that they can make the save and develop from,” said Schwab.

Skating Strong: Contrary to popular belief, skating is crucial to a goaltender’s success.

“Personally, I feel the lifeblood of goaltending is skating ability,” said Reiter, who played seven years of pro hockey. “Strong skating skills allow us to achieve proper shot preparation which allows for more time to read the play. In reality, if a goalie faces 30 shots on any given night, less than 30 seconds of the game are actually spent making saves. The rest of the game the goalie's job is to position, recover and reposition in order to make saves. In order to achieve this, the goalie must have a great skating foundation.”

Strong skating ability allows a goaltender to read the play and at times come out of the net to make a move before the opposing player comes down low for the shot.

Let Them Play as Forwards/Defensemen: While goalies are still young, let them play out as forwards or defensemen.

“In our association, we only dress one goalie for the games so the other can play out,” said Schwab. “It’s better to have them playing, skating and learning the overall hockey sense rather than just sitting on the bench for the whole game.”

There are a few goaltenders in the NHL that didn’t become goalies until they were 12 or 13 years old.

“I skated out until I was 11 years old,” said Reiter. “Skating out helps them with their skating technique and I'm a big believer that the lifeblood of goaltending is skating ability.”

Don’t Forget the Mental Side: The mental aspect of the game for goalies is huge. Help keep your netminder’s head in the game and help them grow as a goalie by building their confidence.

“Make your goalies feel good by giving them a reactionary shot,” said Schwab. “Give them a shot that they can easily save with their blocker or their glove. You don’t want to have your goalie losing that confidence in net. Confidence is such a huge element for them, at any age.”

USA Hockey offers a plethora of information and drills specific to goaltenders. Check out the material at www.USAHockeyGoaltending.com to learn more and better help your goaltenders make the next save. 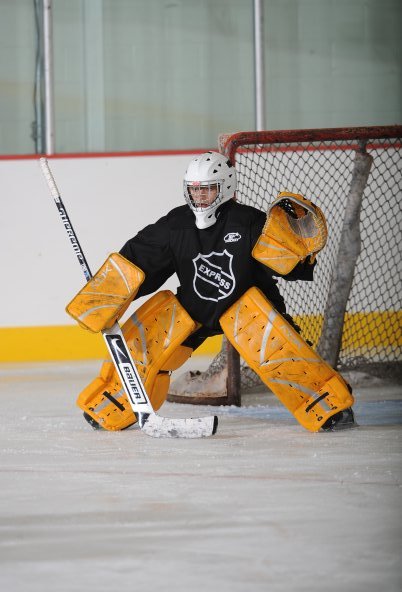 USA Hockey offers a plethora of information and drills specific to goaltenders. Check out the material at www.USAHockeyGoaltending.com to learn more and better help your goaltenders make the next save.