PLYMOUTH, Mich. — The USA Hockey National Team Development Program squads may have wrapped up their seasons, but USA Hockey Arena was again host to some of the nation’s top players in May, all of them in net.

Nineteen of the top American men’s and women’s goalies spent four days working on their development and training. It was an opportunity for the coaching staffs and scouts to teach, coach and evaluate the players on the ice.

“We are trying to get to more goalies at every age," explained Thomas Speer, USA Hockey national goaltending coach. "Instead of bringing three to four at each age group, we are going to get 14-20 from the 2004s all the way up. That is our No. 1 goal to get more people involved, more eyes on goalies and help develop the program as a whole.”

For Katie Million, the director of women's national team programs for USA Hockey, and Bob Corkum, head coach of the U.S. Women’s National Team, it was an opportunity to watch some of the top collegiate and postgraduate female netminders in action over the four-day period.

“This is a perfect example of having very focused goalie training,” said Million. “This gives us an opportunity to introduce them to new drills and things to work on. And of course, it allows us to follow their development throughout their career.”

“Anytime you get to come to a USA Hockey event, it is always an honor,” said Polusny. “This one, especially from a goaltender’s perspective, there is no better way to learn than to watch other top-level goalies right along with you. When you are with them, you can’t help but to pick up some things in practice from them.

“A part of my game that I have always tried to work on is patience. We have been talking a lot about how for goaltenders at the highest levels, the physical side of the game isn’t what we should focus all our attention on, rather it’s the mental side. We need to try and continue to grow on the mental preparation, the focus on the ice and I think that playing at this high level, even if it’s just for a weekend, it helps you keep the focus even when you go home.” 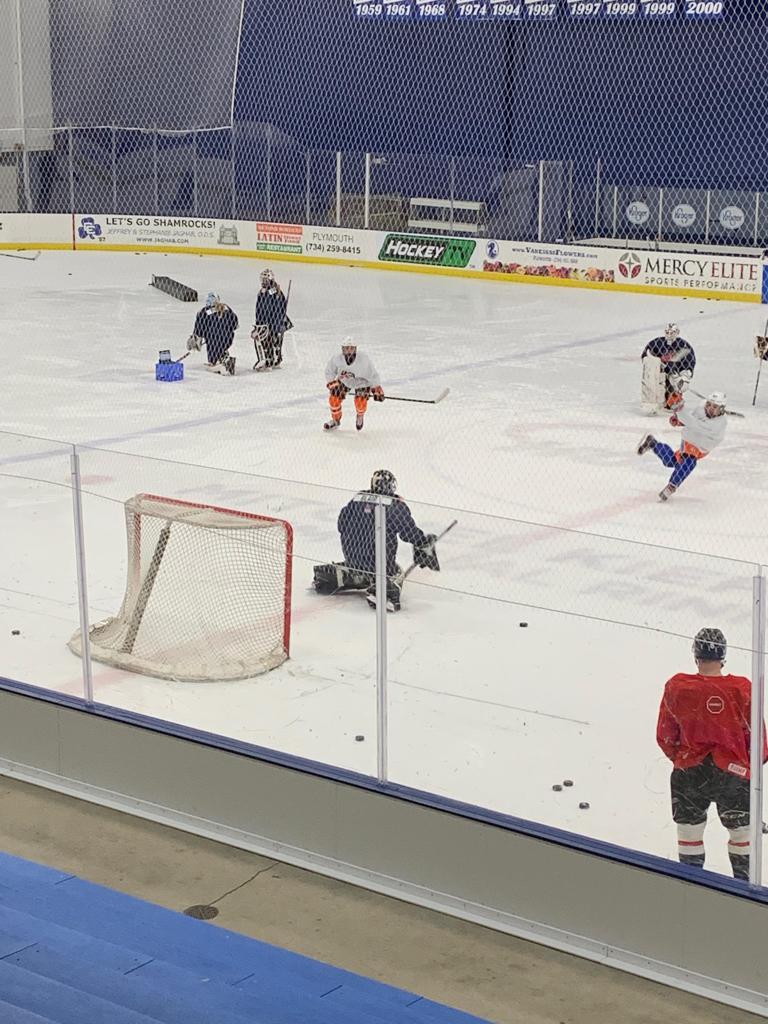 Million has seen the skill level increase over the last few years.

“The skill of these women, every year it is getting exponentially stronger and better,” stated Million. “It is amazing. I think that it is going to continue and only get more competitive. We are already finding that spots on our camps and teams, it is really hard. There are such good athletes and probably some deserving to be at our camps and teams, but the skill level is that good across the nation. It’s getting harder and harder.”

Speer acknowledged that same progression on the men's side, as staff began looking at goaltenders for the U.S. National Junior Team that will compete in the next IIHF World Junior Championship.

“Selection can be tough but having so many quality goalies is a good problem to have,” he said. “We rely heavily on our scouts to help us narrow it down throughout the year so when this time comes, we have our top guys.”

One of the key items for the men’s team is watching video. For Speer, it has been fun to see the players’ reactions and how much it means to them for an opportunity to represent Team USA.

“David Lassonde [associate head coach for the Dartmouth College men's team and assistant coach for the 2020 U.S. National Junior Team] brought a lot of video from World Juniors last year,” he explained. “You can see when he is playing the video, how the kids are at the front of their seat and they want to be there next year. To see the experience in Vancouver, playing in a packed stadium of 20,000 people, you can tell they all want that.

“You have that experience along with watching video of NHL players playing the puck. We had video of the Men’s Worlds going on. You can tell they all want to wear the jersey.”

Nine goaltenders are in the men's camp, five of them players who skated in a USA Hockey All-American Prospects Game including 2017 participant Drew DeRidder and 2018 players Spencer Knight, Cameron Rowe, Isaiah Saville and Dustin Wolf.

“When they arrived here, we handed them a questionnaire on what they thought they needed to get better at and how they think they can contribute to the National Junior team,” explained Speer. “It’s been great to watch. I think that Phil (Osaer) and David did a great job of setting the tone.

“Phil made a great point that the best goalies are playing in May. The goalies responded. They worked very hard and you add the evaluation part of the game and the development side — Jeff Salajko [goaltending coach for the Detroit Red Wings] and Dave Rogalski [development coach for the St. Louis Blues] — they are helping develop them and giving them those little tips that will help them get to the next level.”

For Drew DeRidder, the camp has given him another perspective and an opportunity to work on his game.

“I’ve always loved these camps that USA Hockey puts together and have gotten to know a lot of great kids and coaches,” he said. “As far as development, it’s awesome to have a bunch of high-level coaches there with different techniques and viewpoints. I also find it useful to evaluate other goalies to see where I’m at compared to other high-level goalies.”

At the end of the weekend, one message really resonated with both the players and the coaching staffs.

“It’s a huge honor to wear the USA jersey,” said Million. “That is what we said on day one. It is an honor for you to be here and to wear the logo. You need to wear it with pride and have fun with it too.”